Mount Prospect set a policy that Delegates would pay their own way to Sèvres, which is a suburb of Paris.  It meant no tax dollars paid for Mayors, their spouses, or Commissioners’ trips.   Delegation exchanges require hosting French delegates in our homes.  We also must stay in the homes of our counterparts in France.

Sister City organizations were established in the 1950s by President Dwight Eisenhower as part of the United States State Department. It is considered a part of having U.S Citizen Ambassadors. It was patterned after Europe’s “Twinning” efforts to try to heal the wounds of WWII. President Eisenhower had witnessed terrible war, but believed peace might prevail if we visited in each others homes.

Visits are scheduled every two years – either the French come to Mount Prospect, or Mount Prospect goes to Sevres.  That means we save money to go every four years to France, or host delegates from France in our homes. It is a wonderful commitment made for the exchanges.  Not like a vacation, delegates must walk most places, visiting factories, schools, museums, tourist attractions.  Since we stay in people’s homes, we take gifts for French-host families, and official gift exchanges between towns.  Those are usually done at special dinners.

In 2007 both delegations visited the World War II Cemetery in Normandy, France.  More of visit on Normandy site.  Before taking a train to Normandy, we toured Paris, Chateau of Versailles (very near Sevres) and had dinner on the Seine River.  I was matched to a fellow writer, Franch-Marie Chauvelot, and elected official and we talked when we could. Above is a wonderful picture of us at a famous bookstore frequented by Hemingway.

Visits brought delegates to our homes but also met “American” events – traditional Thanksgiving dinner, cookouts, ballgames, square dancing and fancy dinners.  Exchanges allowed Mount Prospect organizations to interact with the French. Some visited over lunch, or some at the French Market held by the Lion’s Club every fall.  Below is a 2013 visit to Mount Prospect with the park district hosting a cookout.

In 2013 the delegation visit also held a dinner to which the community was invited.

Most Visits exchanged both elected and non – elected residents who are interested in the exchanges.

Special thanks goes to “Citizen Ambassadors” – non – elected who both hosted parties and went on trips.  Some photos honor their commitment to Sister Cities and to peace.

On May 29 to June 5, 2011, during an Exchange visit to Sévres, we extended the trip of the Chateaus of Loire Valley –  Planned were castles and chateaus of the Kings, Queens, and aristocracy.  Included in the trip of the Loire (River) Valley was the Chateau de Villandry and it’s Gardens.  Those gardens were Ornamental (with different plants and flowers symbolizing different kinds of love); Water (plants around a pond); Sun (with its oranges and yellows); the Maze (symbolizes a man’s path on earth); Herb and Vegetable Gardens that supplied the residents of the Chateau. 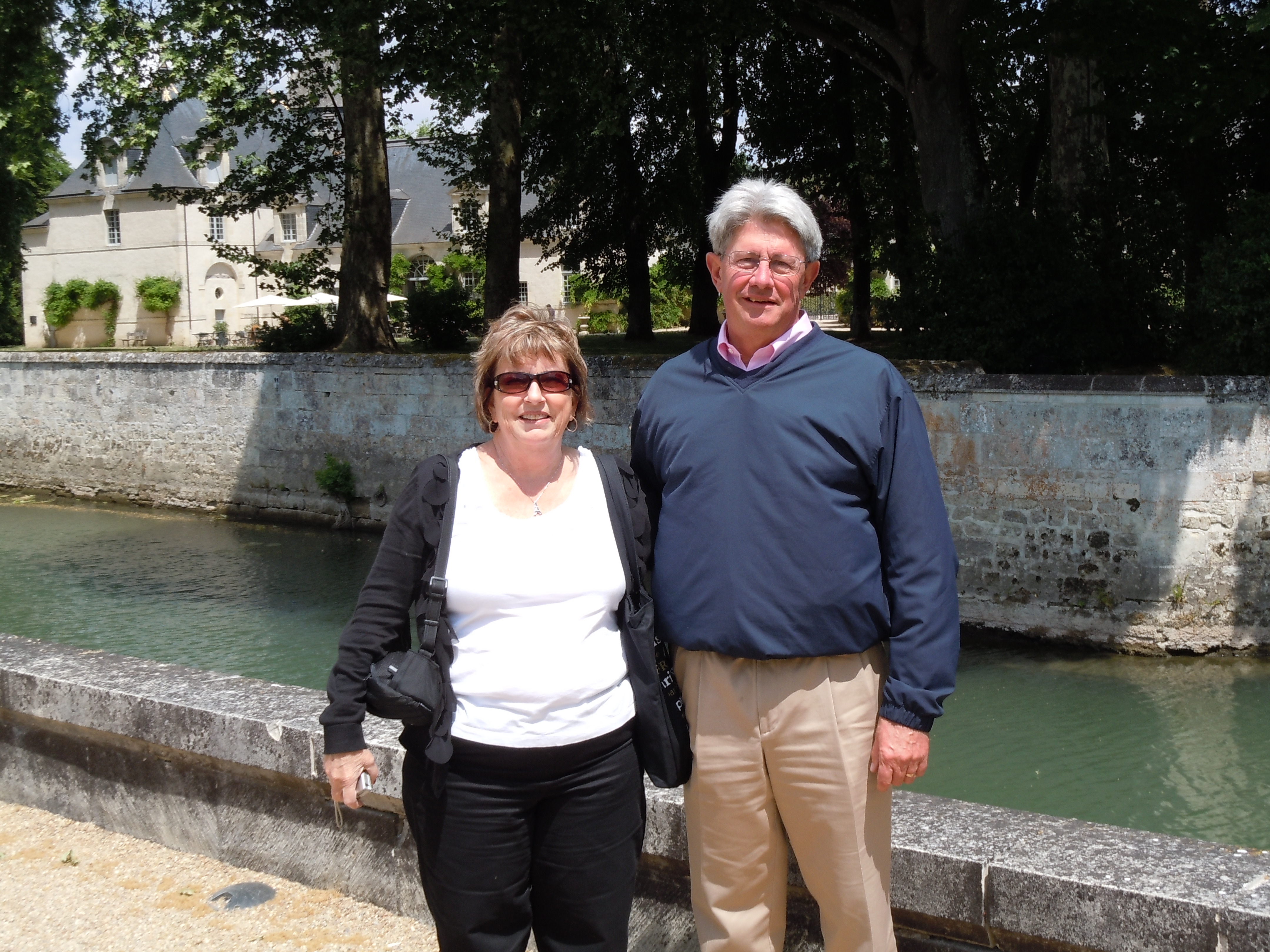 Paula and Gary Randant hosted delegates and dinners at their home. Here they are next to a moat in 2011.  Paula was president of the Illinois Sister Cities Organization. Gary was always by her side.

As the 2011 visit approached, I thought exchanges between business people would be another chapter. I was honored to have owner of Mount Prospect Child Care to join the delegation – Michael and his daughter, Ashleen Davey.

Following a 2013 visit to Mount Prospect, we were saddened to learn that Sevres Mayor François Kosciusko-Morizet had a stroke and passed away a few months later.

We are blessed that Bénédicte continues to visit Mount Prospect.